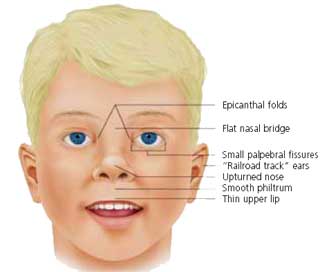 Facial Features of child with FAS
“…some studies have estimated that at least 80 percent of children in the US foster system have been removed because of  substance abuse problems in their families, and it has been reported that 20 percent of the children from the former Soviet block nations and Romania have Fetal Alcohol syndrome, with another 60 percent having been exposed prenatally to alcohol.”-Raising the Hurt Child

My children were part of the percentage that were exposed prenatally to alcohol.  They aren’t just a number in a book, they are people who have to suffer long term effects for a choice that their birth parent made for them.  They are the world’s youngest abuse victims, given alcohol in the womb.

“When you drink alcohol, it enters your bloodstream and reaches your developing fetus by crossing the placenta.  Because a fetus metabolizes alcohol more slowly than an adult does, your developing baby’s blood alcohol concentrations are higher than those in your body.  The presence of alcohol can impair optimal nutrition for your baby’s developing tissues and organs and can damage cells.”- Mayoclinic.com

I became very frustrated when I began my research on FAS and all the alcohol related syndromes.  Articles I read stated that the treatment for FAS was to avoid drinking alcohol while pregnant.  That didn’t help me at all, I knew how it happened, I wanted to know what to do after it did!

What I did find out confirmed what I thought,  Rafal’s impulsive scalping behavior was due to his FAS. Once I knew that my adopted children had been exposed to alcohol in the womb, I wanted to know what some of the long term effects were.

Signs of fetal alcohol syndrome may include:

*deformities of joints, limbs and fingers

*Slow physical growth before and after birth

“While some children and adolescents with FAS have IQs that range from as low as the 20s to as high as 135, the majority of the children have IQs between 85 and 95, which is the low to normal range.”

So, what do all of these lists look like in the form of a child?
First of all, in Rafal’s head wound story, he personifies the impulsive behavior angle with his self-scalping and his inability to comprehend cause and effect.  His anger toward anyone who pointed out the fact that he was sporting a huge gash on his head exhibits social deficits.  His idea that everyone should ignore his gash to make him feel better, not reality.
But, on the flip side of the coin is a child with a fantastic imagination.  The Native American became so real in his mind that he imagined himself  to be a little boy attacked by the savages.  He found the tomahawk (girl’s razor) sitting on the rock (sink).  Suddenly, the savage sneaks up behind him and viciously scalps him, blood squirts out, brains ooze out of the top of his skull.  But, he is brave!  He doesn’t cry out.  He wouldn’t cry out.  Instead, he bites down on his own cheek just to smother the cry that resounds within his belly.  Whew!  He has survived the scalping.  He examines his wound in the mirror.  Mirror?  What’s this mirror doing in the middle of the woods?  Oh no, he realizes, I’m in the bathroom.  No Indians.  No savages.  Just a double bowl sink splattered with bright red drops of blood.  Reality check.  Audrey is downstairs.  Soon, Mom will be back from the store.  Rafal retreats from the woods (bathroom) and ventures back into civilization to face the other settlers.  Mom comes in, sails through the kitchen, depositing Walmart bags on the island, patting Rafal on the shoulder in the middle of the motion.
“Mom, what happened to Rafal’s head?”
Incidents like this can make me bitter or better.  I’ll admit, I was aggravated at having to drive a half an hour, taking an afternoon away from school to travel to the dentist to be told that Rafal had bitten the inside of his cheek.  However, the whole incident became a family story to be told with humor, around the dinner table.  We are not laughing at Rafal, but letting him know, we all do silly stuff and it’s okay, move on.
Part III on Friday!