Every powerful fairy tale begins with ‘once upon a time’ and ends with ‘and they lived happily ever after’and every one of our stories lies into between those phrases. The part of the story we tend to ignore is what the bit that happened before once upon a time. The story of adoption begins before the foundation of the world, before the once, before the clock ticked and the years began their countdown to Christ.
We usually read the bible account of Creation and assume it is the beginning.

” In the beginning God (prepared, formed, fashioned, and) created the heavens and the earth.” Genesis 1:1

Sounds like a great beginning, right? Once upon a time God created the earth. He created man in his own image, male and female, He created them. By chapter three the whole story seems to fall apart. Adam and Eve eat the forbidden fruit and become like God, able to distinguish between good and evil, blessing and calamity. God sent them forth from the garden. Enter the curse. Adam and Eve are separated from their Father.So soon the plot turns sour. So many of us ask, why didn’t God rescue me? Why did He abandon me? The answer is the curse. Everything we pray about has something to do with the curse. To end sickness. The curse. To wipe out poverty. The curse. To stop war. The curse. To wipe away famines. The curse. To rid the world of abandonment and rejection. Reading the rest of the old testament is a lengthy list of tales of the effects of the curse.the people God created forget Him. Noah and a worldwide flood. God makes a covenant with Abraham. He adopts Israel. Joseph  followed by four hundred years of slavery. Moses and the exodus. The Wilderness. Promised land. Prophets warn.The story gets stuck on repeat. Seven cycles of judgment. Banishment. Prophets promise a Messiah. Four hundred years of silence. When will the death end? When will the curse be broken?
But, as story tellers go, God is the master. He created the story and He is the king of the flashback. We don’t have to wonder what His plan is. He tells us clearly by chapter three that the woman’s offspring will bruise and tread his skull and the serpent will bruise his heel-the first prophecy of Jesus uttered to a serpent and the mother of all living.
But, let’s go back before time.

Before time- Jesus. We tend to read the story as linear. We mark dates on a time line, each century, decade, year, month, week, day, hour and minute as if it has always worked that way. It hasn’t. God doesn’t count time that way. I can’t tell you exactly how He sees it, but I can tell you how the adoption story goes. It is so much broader, deeper and more thought out than most of us give Him credit for. We try to take credit for adoption, as if humans in their finite wisdom thought, this child is an orphan, I should do something about it. Let’s make up a word for it- adoption. Yet, that is so far from the truth. Back to the story. We run into more flashbacks in Hebrews.

” By faith we understand that the worlds [during the successive ages] were framed (fashioned, put in order, and equipped for their intended purpose) by the word of God, so that what we see was not made out of things which are visible.”-Hebrews 11:3

Fairy tales tend to use magic to get things done. In God’s kingdom, it’s called faith and it doesn’t depend on pixie dust, but you do have to believe. We believe that God framed the world for His intended purpose. The purpose is revealed in the book of Ephesians.

” Even as [in His love] He chose us [actually picked us out for Himself as His own] in Christ before the foundation of the world, that we should be holy (consecrated and set apart for Him) and blameless in His sight, even above reproach, before Him in love.
5 For He foreordained us (destined us, planned in love for us) to be adopted (revealed) as His own children through Jesus Christ, in accordance with the purpose of His will [[b]because it pleased Him and was His kind intent]—
6 [So that we might be] to the praise and the commendation of His glorious grace (favor and mercy), which He so freely bestowed on us in the Beloved.”- Ephesians 1:4-6

Read over the set of verses again. I know, I usually skim familiar verses. Don’t this time. Within these verses is the crux of the story of adoption, or THE STORY period. Our story. Our purpose. The purpose of the universe. Do you see it? Before time. When Jesus and God were hanging out together, they hatched a plan. They wrote the story Before God spoke the world into existence, He foreordained our adoption. He actually picked us out as His own because it was His kind intent. He had a family photo of us on the mantel before we were born. Before He formed Mount Everest or giant sequoia or any of the mysteries and marvels of nature- He thought of family. He had your photo with the perm gone wrong in His wallet before you walked into that hair salon. Family is the purpose of the universe. His family. Adam and Eve may have been his first children listed in the book of Genesis, but according the flashback in Ephesians, He had already planned to adopt us all when the dirt and Adam didn’t exist. 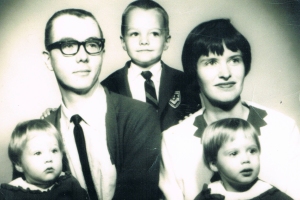 So, what does it mean to be adopted by God? It means you and I are each part of the story. We each have our own chapter and weaved together they make up the greatest adoption stories ever told. Stories of rejection and abandonment are turned upside down in God’s kingdom. Why? Because of adoption. It is the faith of adoption in which we receive the Spirit of adoption and cry “Abba, Father” that makes the rejection fade. The curse is broken. Through Christ we have redemption, deliverance, remission of sin, wisdom and we know the plan. Survival behaviors take a back seat when faith drives. We are chosen. We are loved. We are secure in His purpose. We know He works out everything in agreement with the counsel and design of of His will. There may be a god (little g) of this world roaming to and fro looking for someone to devour. He may be the Miss Hannigan of this worldly orphanage but his plans, his design is not the end of the story.WE will have some hard knock days, Jesus told us we would have trials and tribulations, but to be of good cheer, He has overcome the world. We do get our happily ever after. Have faith. The whole story is written. We know the ending. The prince who died and rose again is coming back again to rescue us from this earthly orphanage and take us home to live with our forever family.
So we follow in the footsteps of our Father, writing His stories, adopting, creating forever homes for those who suffer under the curse, those abandoned, those orphaned by wars, famines and drugs, those social orphans who long to belong just as each of us does. We adopt because it was His plan-the purpose of the universe.