“Mondays are awful!” I hear from countless Moms. It’s tough to get kids out of bed, get them going. Meltdown Mondays, I like to call them.  It seems as if no matter who many Mondays we have marked off the calendar, the meltdown Mondays hit us like a slap in the in face, We’re blindsided. I don’t like being blindsided, do you? So, I decided to start a series- Manageable Meltdown Monday! 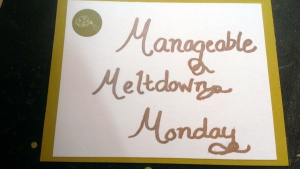 Meltdown Mondays are even more potent for children who have one of the capital letter syndromes- FAS, ADD, ADHD, attachment disorders, processing disorders or land somewhere on the Autism spectrum.  These kids who crave, no, demand that the schedule does not change. Everything the same every day. For some reason they meltdown more when schedule resumes. It throws them for a loop that they are no longer in charge of the schedule.

“Traumatized children are afraid to be cooperative, compliant, and receptive. To them, such behavior represents giving in, which translates to losing. They have learned to oppose anything that is suggested by others…they are experts at counteracting anything directed by others….they refuse to respond to anything that someone else wants. Consequently, they choreograph battles over the most insignificant issues.”- Parenting the Hurt Child

We had company over the Christmas break for more than eight days straight. Kids home from college. Out of state relatives packed our house. Kids were kicked out of bedrooms to sleep on couches and inflatable mattresses. When we weren’t cooking food, playing games, watching movies or catching up on each others lives, we went out. We went to movies. Out to eat. Out for coffee. Hiked the trail. Youngest son was a bit overwhelmed and decided to skip a lot of the outings and stay home with whichever relative was there. After everyone headed to their own homes, he suddenly wanted to go somewhere. I was busy cleaning up and resting (getting ready for a New Year’s Eve party). “I don’t get to every go anywhere!” he complained. “Company hasn’t even been gone for four hours!” I listed the opportunities that he had passed up for ‘going somewhere’ he had passed up.  Didn’t help. See, those outings were out of his comfort zone and out of his control. I did require him to go on some and he enjoyed them. Forcing him to go on all of them would have been overload for him.

After weeks of holiday celebrations (which are a nightmare for some of these kids). Dinners out. Movies.Parties. Barnes and Noble days. We suddenly turn the tables once again and sometimes with out warning. Get up early for school- NOW! Vacation over. Math is on. No more lazy gaming morning. No more late night movies. Everything is back to ‘normal’. They just figured out the new normal of holidays.

I filled in the whiteboard calendar for January on December 31. I wrote in large letters- START SCHOOL on Monday, January 5. He watched and moaned. But, it gave him time to prepare. Mentally.

So, number one to ease the pain on managing meltdown Mondays- Let the child know what is coming next! Make his day as predictable as possible. Even if he is older and says, “I know, MOM!” Say it anyway. Say things such as….

If you homeschool, add some parameters. “We will do three subjects Monday.” or “We have a dentist appointment in the afternoon.” Let the child know what is coming up. Disclaimer: this is not a magic pebble. It will not make Mondays fairy tale perfect. It will make them more manageable. What has worked for you?