My children and I were standing outside staring expectantly at the sky. On our eyes were the eclipse glasses I had preemptively ordered weeks in advance, after much research on which ones were NASA approved. We had attached them to plates to block out any rays that may try to creep in and harm curious eyes.  We had science notebooks ready for careful observations. For days we had been experiencing dry, blaring heat and that morning was no different. As we stood on the porch staring at the sun in expectation, at exactly 1:10, the moment the eclipse was to begin, we were greeted with – clouds.

That’s right – a humongous cloud had parked itself right in front of the sun. We got peeks of the giant star as the black disc gradually rolled in front of it, but it didn’t take long for the clouds to roll back across. Then the clouds turned black. My son insisted it was going to rain; I told him that the forecast was not calling for rain and we would be fine.

Then it rained. Hard. We were probably the only neighborhood in our town, possibly within the entire line of the eclipse that had rain. I literally felt like Eeeyore in the picture with the rain cloud right over his head. Then there were tears – mine. Okay, it was more than tears. Usually I go with the flow in situations that cannot be helped, but I was angry. Really angry, a feeling that seemed out of place and extreme in relation to the situation. Even while I was experiencing it I knew it was an inappropriate response, but at the moment, I just couldn’t seem to control my emotions.

I told God that it wasn’t fair, that He was displaying His creation for all to see, but, like Lucy, he pulled away the football and said, “Not today, Charlie Brown. This show is for everyone but you. Thanks for playing.” I saw everyone else around me grabbing that ball and running while I was left with my head down, feeling let down, again.

After months of struggling to get my feet back under me after some unexpected circumstances,  I had felt like I was finally a fun mom again. I had planned something special for my kids. They were excited, I was excited, and we had spent time preparing. When the rain came, I felt like God had let me down, and I was hurt. After I had some quiet time with Him I realized that this frustration was really just the symptom of a bigger problem that had been brewing in me.

In the midst of my growing faith, I was feeling the ache of deferred hope. I felt the bucket of all of my hopes and dreams dumped on top of my head once again. All of the dreams that are now put on hold. The desires that I have that are on the back burner when they were just within my reach. Every time the football was pulled away from me flashed before me like one of those old filmstrips.

I thought about David. The same David who stood before Goliath with just a slingshot, the same David who was anointed by God to be a king, found himself on the run, afraid for his life. He hid in caves. He pretended to be insane. He spent so many years away from his family and the peace and comfort of home. All of this was due to circumstances outside of his control.

The book of Psalms is full of the songs of David. Many of them begin with David expressing his fears, his anguish, and his loneliness. I wonder sometimes if he questioned his calling when he was lying in quiet in the darkness. “I didn’t choose this God. You did. Is it worth it? Are you sure you picked the right person? Did you forget?” As strong as David was, he was holding onto a promise that God had given him, a promise that was deferred in its delivery. There were times that he questioned God and asked Him when he would be delivered from the weight of the life around him.

Did God forget about David? Did he choose the wrong person after all (“Oh, you’re David, with the RUDDY complexion. I was looking for David with the MUDDY complexion. Awkward.”)? Of course not, because we know that that is not in the character of God, and we also know the end result of God’s promise to David. Through him came Christ, and through Christ comes our redemption.

While David was real with God, he never wavered in his devotion. He always ended his laments with an acknowledgment of who God was. He reminded God of His promises. Even though he was in a place where his dreams were on hold, he knew that God would bring him through. 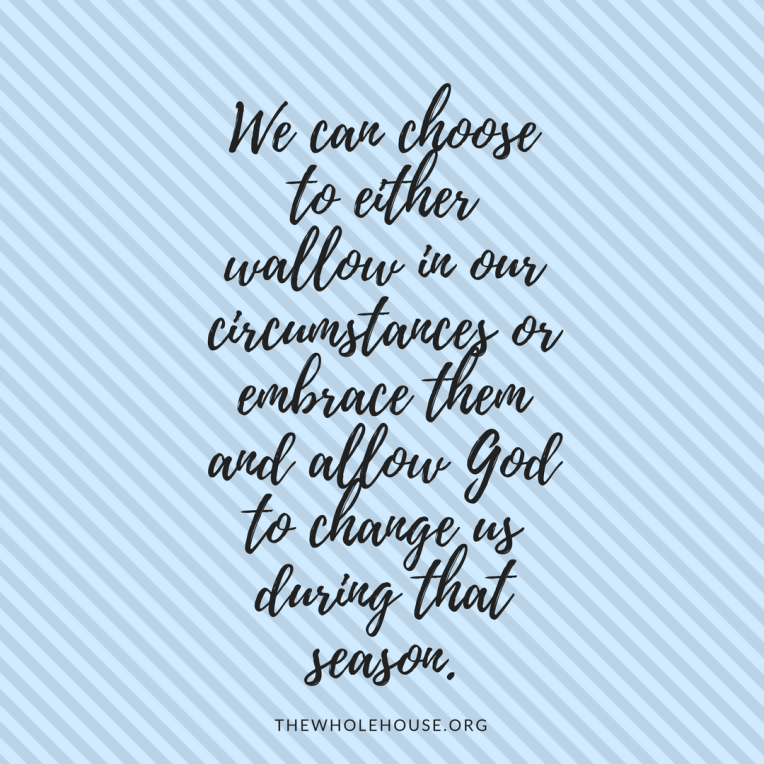 As I was making dinner that night I turned on a podcast by Sarah Clarkson, the title of which was, “Overcoming Obstacles So You Can Own Your Life.” She talked about how we often throw adult-sized tantrums when we find ourselves in situations we can’t control that go against what we think we should have. We can choose to either wallow in our circumstances or embrace them and allow God to change us during that season. God provided me with what I needed to hear right when I needed to hear it. It was a reminder to me that He does see where I am. He doesn’t turn back on His promises, and He hasn’t gotten so busy knocking someone else’s socks off that He forgot about me. In fact, David was a better king because of the times he had to lean on God, and we can become stronger people when we go through dark times.

I apologized to my kids for my behavior, and went to bed in peace, telling God of his faithfulness, and thanking Him for removing the clouds so I could see the sun, which He did literally and figuratively. The clouds parted at the peak of the eclipse, right at the height of its glory. That’s exactly how it happens when we trust in God’s timing.

2 thoughts on “Don’t Rain on My Eclipse”