Amerey and Kathleen ask some important questions – what is real feminism? Are women created equal? What is the origin of feminism? It all began in the Garden with a serpent. Join these ladies as they talk through these questions and get a little goofy along the way. (There may or may not be some singing in this episode.) 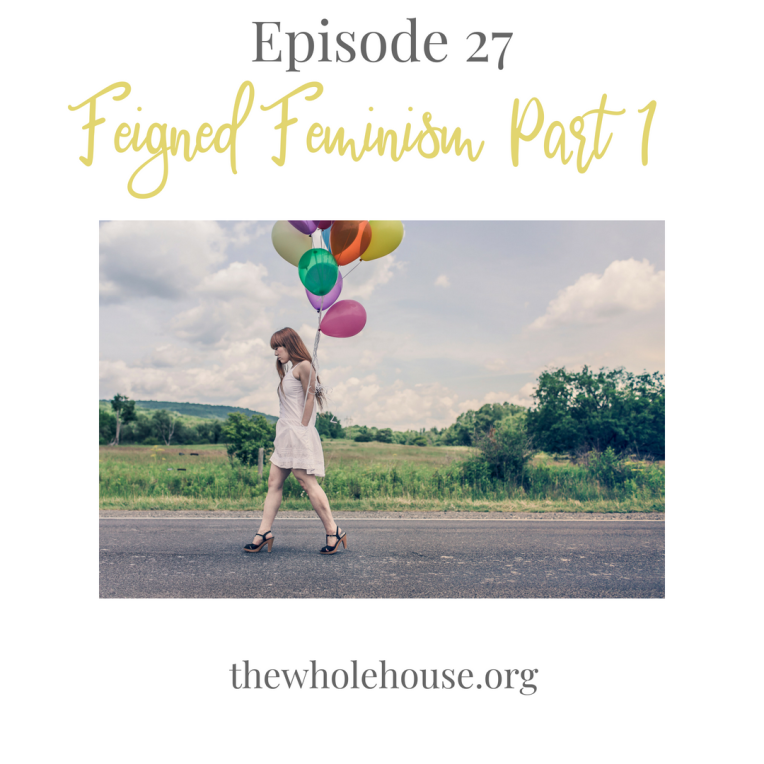 Why is the word feigned in the series title?

I’ll just be up front. I think the modern feminism is pretend. It’s not true feminism. It’s not true equal rights. I’ll get more into that later. Now you have the foundation of the title, let’s move forward.

When and why did feminism begin?

“Now the serpent was more subtle and crafty than any living creature of the field which the Lord God had made. And he [Satan] said to the woman, Can it really be that God has said, You shall not eat from every tree of the garden?”- Genesis 3:1

Eve is hanging out in the garden and here comes satan, not a tiny garter snake, but a huge creature. He went straight for Eve, why?

Several of my sons (and hubby) are history buffs. One in particular loves Civil War history, particularly the battles. War strategy is not my strength, I don’t know how to get out a map and plan out a battle. One thing I have learned is, if you can, target people in the position of power and the whole infrastructure may crumble. Often we hear that satan went after Eve because she was weak. What if he went after her because she was powerful? Think about that for a minute. Let your suppositions reshuffle. It’s okay. I can wait. Ready?

Satan was crafty, shrewd and according to Bible teacher and theologian, Jim Cavins (author of the Great Adventure Bible Study), intimidating. He went after Eve because she was powerful, not because she was weak. He went after her by using her weakness. Don’t confuse the two. She had the power of influence. As the mother of all living, women bring life wherever they go. They have influence, as proved by Eve convincing Adam to eat the fruit.(More on this topic in a later post). In one moment, Eve used her power to change the world, as they ate from the tree of the knowledge of good and evil and instantly lost their preternatural gifts.

“ And the Lord God said to the serpent, Because you have done this, you are cursed above all [domestic] animals and above every [wild] living thing of the field; upon your belly you shall go, and you shall eat dust [and what it contains] all the days of your life.

15 And I will put enmity between you and the woman, and between your offspring and her [a]Offspring; He will bruise and tread your head underfoot, and you will lie in wait and bruise His heel.“-Genesis 3:14, 15

True feminism is a battle against the curse. The curse of satan, ever adamant to destroy the true purpose of women. The curse of the battle, which isn’t against flesh and blood humans, but against principalities and world-rulers of this present darkness (Ephesians 6:12) the enmity between the woman and satan.  Satan twisted the Word and bruises and treads on our heads with his non existent feet, that is, he fills women’s minds with falsehoods, telling us that we are a lesser species, that what we do is not valuable, that we must be like men in order to be powerful. The sad truth is many of us have stopped fighting and we believe the lie that we must be the version of feminism fed to us by cultural elitists of today. Women must remember he is like a small dog, nipping at our heels. We must smash his head with the truth. Feminism began in the garden of Eden.

Let me take you a step back, one chapter earlier when Eve was created.

“Now the Lord God said, It is not good (sufficient, satisfactory) that the man should be alone; I will make him a helper (suitable, adapted, complementary) for him.” Genesis 2:18

“In Genesis 2:18 the word “Helpmeet” does not occur. The Hebrew expression ezer kenegdo appears meaning “one who is the same as the other and who surrounds, protects, aids and supports’. There is no indication of inferiority or of a secondary position in a hierarchical separation of the male and female “spheres” of responsibility, authority or social position.”- Dr. Susan Hyatt, In the Spirit We’re Equal

I hauled out my huge Strong’s Exhaustive Concordance and studied myself (cause that’s me) and it is true. God always intended for men and women to be equal. Satan started the war on the sexes and between them in the garden. It’s been going on ever since, satan nipping at  women’s heels (and that of her offspring) through the culture of civilizations from the beginning to the misguided feminism in our’s today. The more evil the culture the more women are mistreated, misused  and devalued. Women and men are not the same, that’s where feigned feminism gets off track. We are unique and have distinctive gifts, talents and strengths. That’s another post!

To wrap it up? Why feminism?

The purpose of Adam and Eve was to be one holy family. Family is the foundation of God’s world. He has made it so.

“As the source of the family and life itself, the union of the sexes ‘is placed at the center of the great struggle between good and evil, between life and all that is opposed to love.”- Theology of the Body for Beginners

If you want to know what is most valuable, look for what is most fought against, what is being battled most vehemently and violently profaned. There is the crux of true feminism, equality. In the eyes of our heavenly Father, equality already exists. In the eyes of this present darkness, it is muddled, captive by satan’s  so-called philosophy, intellectualism and vain deceit (idle fancies and plain nonsense), following human tradition (men’s ideas of the material rather than the spiritual world) (Colossians 2:8).  Profaning the value women and their power of influence, to tear down the family is the purpose of satan, see the curse, he bears his fangs and bites where our suppositions, ideas, theologies originate. Women’s heads are filled with false doctrine. When our Achilles heel is damaged, we cannot walk in our purpose.

When did feminism begin?

In the Garden of Eden. Both true feminism, equality with men and feigned feminism, the war of the sexes for equality, both began in the first three chapters of the history  of civilization.

“There is [now no distinction] neither Jew nor Greek, there is neither slave nor free, there is not male and female; for you are all one in Christ Jesus.”– Galatians 3:28